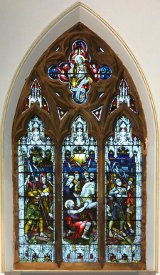 Originally Quarndon had a Chapel, located just off the lower part of Church road, which was operating as a place of worship as early as the 12th century.  Originally this was attached to All Saints' Church (now Derby Cathedral), and for a while to St. Alkmund's in Derby, then later St. Alkmund's in Duffield before gaining its own vicar and vicarage in 1844.  It was partially demolished after the construction of the new church building, but some ruins and the churchyard remain.

The Current church building was consecrated in 1874 as a replacement for the old Quarndon Chapel located lower down the hill.  Funding was provided in part by a generous donation of land and funding by the Reverend Alfred Curzon, 4th Baron Scarsdale supported by donations from the villagers and their neighbours and friends.  The east stained glass window was added in 1890, and a striking clock in 1897. 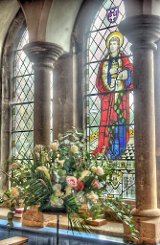 In the 1920's and 1930's various additions were made, including a side chapel dedicated to St. John together with the south stained glass windows, the oak altar rails and the choir stalls.. More modern additions include electric lighting, a good quality sound system and a toilet located adjacent to the porch.

More details of the church history and construction may be found in 'Quarndon Then and Now' Edited by Bryan Harris and published by Quarndon Parish Council.